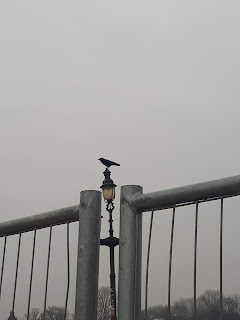 For some reason I have this thing with crows: they sort of fascinate me. Maybe it has something to do with Poe’s “The Raven," as I always loved that poem. But, honestly, I don’t know what it is . . . crows . . .  I like them.

Anyway, today I had an interesting interaction with a crow. It all started when I was walking through a fielded area and saw a crow standing on the grass up ahead of me.

The moment I saw the bird, the expression "for the birds" jumped into my mind. This probably happened because I had had an apple core, which I had been looking to throw away, in my hand.  (For those of you who don't know, if something is "for the birds," it is, in a sense, garbage. It’s leftover junk that a bird might like to eat.)

So, with this "for the birds" saying in my mind, I was very curious to see if the crow would eat the apple core. Honestly, I didn’t think the bird was going to eat this leftover part of the apple because crows are very skittish. If you so much as make a motion toward them, they usually fly away. I thought that the second I threw the apple core, the crow was going to fly away.

Well, I threw it, and do you want to guess what happened?

The crow didn’t fly away. Instead, he stood right where he was until the core landed, and once it did, he hopped toward it -- and began eating it. I felt very satisfied when I saw that.

And then, even better, right before I was about to go into the U-bahn station, I looked back at the crow and saw that he was still pecking at the apple core.