Well, that was quite the wake-up call.

Usually, I don’t look at the price when I’m buying produce. I mean, I have an idea what the items cost, but I just sort of let the cashier ring up the stuff and I'm content to pay.

“Oh, are they Elstars?" the lady said, referring to the type of apples they were. "Those are expensive."

But it really didn’t matter what kind of apples they were. 1.45 for two apples is a rip-off. I mean, just down the road at another supermarket, you can get a bag of 20 apples for about 2.50 euros, which means that the apples at this second supermarket are six times cheaper.

I just paid for one apple and left.

A wake-up call indeed.
Posted by Chad Smith at 12:30 PM No comments: 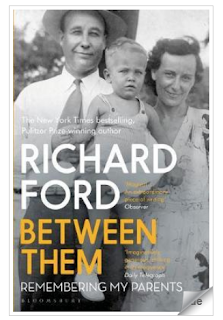 One thing I've noticed is I do a lot of explaining on this blog. Whenever I post something, I want to be crystal clear. This makes sense because as a writer, I have always prided myself on my clarity. I like to break things down for the reader.

But, I must say, doing so usually involves a lot of explaining. Sometimes I even over-explain, so much so that people who have edited my stuff have said to me, “Chad...we get it.” Well, for this next post, I thought I would do the opposite -- I would refrain from explaining.

Recently, I finished the book “Between Them,” a memoire that the author Richard Ford wrote about his parents.  As I read the book, I underlined the sentences and passages I especially liked. I do this with all my books.

In the following post, I’m going to reproduce each and every line or passage I underlined in "Between Them." But I’m not going to provide context -- no explaining, no set up, just the things I underlined. I thought this could be a fun exercise, as it will force you -- and me, probably -- to draw different kinds of conclusions.

So, without further ado, here goes.

“Whereas being ignorant or only able to speculate about another’s life frees that life to be more what it truly was.”

“…being together in a way that defines category. They more than certainly had that in them.”

“He was her protector, be she was his.”

“Possibly he dreamed at night … of winding curb-less streets without transients for neighbours.”

“He was invisible, but different from how he’d been invisible. It satisfied him almost completely.”

“In retrospect, the advent of death can cast a too dramatic light on the events leading toward it.”

“There is one quality of our lives with our parents that is often overlooked, and so devalued. Our parents intimately link us, closeted as we are in our lives, to a thing we’re not, forging a joined separatness and a useful mystery, so that even together with them we are also alone.”

“‘Oh, yes. Your mother’s the cute little black-haired woman up the street.’ These were words that immediately affected me, and strongly, since they proposed my first conception of my mother as someone else, as someone whom other people saw and considered and not just as my mother.”

“It is, of course, a good lesson to learn early—cute, little, black-haired, five-five—since one of the premier challenges for us all is to know our parents fully—assuming  they survive long enough, are worth knowing, and it is physically possible. The more we see our parents fully, after all, see them as the world does, the better our chances to see the world as it is.”

“A life lived efficiently wouldn’t save you, but it would prepare you for what you couldn’t be saved from.”

“His job may have even have been harder than ours was—though only on that day.”

“The obvious question—how serious is all this?—can be dispensed with in a hurry: the very worst.”

“And still, in a way, even this news did not change things. The persuasive power of normal life is extravagant. To accept less than life when less is not overwhelmingly upon you is—at least for some—unacceptable.”

“I resumed my teaching and talked to her most days, though the thought that she was getting worse, that bad things were going on, and I couldn’t stop them, made me occasionally miss calling. It quickly became an awful time for me, when life felt to be edging toward disastrous.”

“And that was how we did that. One more kind of regular life between us. I went to campus, did my work, came home nights. She stayed in the big house with my dog. Read books, magazines. Fixed lunches for herself. Watched the Dodgers (this time) beat the Yankees in the Series. Watched Sadat be assassinated. Looked out the window. At night we talked—never serious or worrying things. With Kristina, who was working in New York and commuted on weekends, we went on country drives, looked at antiques, invited visitors, lived together as we had in places far and wide all the years. I didn’t know what else we were supposed to do, how else such a time was meant to pass.”

“My mother’s eyes were very brown.”

“I never saw her dead. I didn’t want to. I simply took the hospital’s word when the nurse called early one December morning, just before her birthday.”

“But, as I said, I saw her face death over and over through that autumn. And because I did, I believe now that witnessing death faced with dignity and courage does not confer either of those—only pity and helplessness and fear. All the rest is just private—moments and messages the world would not be better off to know.”

“My mother and I look alike. Full, high forehead. Same chin, same nose. There are pictures to show it. In myself I see her, hear her laugh in mine. In her life there was no particular brilliance, no celebrity. No heroics. No one, crowning achievement to swell the heart. There were bad things enough: a childhood that did not bear strict remembering; a husband she loved forever and lost; a life to follow that did not require much comment. But somehow she made possible for me my truest affections, as an act of great literature bestows upon its devoted reader. And I have known that moment with her we would all like to know, the moment of saying, Yes. This is what it is. An act of knowing that confirms life’s finality and truest worth. I have known that. I have known any number of such moments with her, known them at the instant they occurred, and at this moment as well. I will, I assume, know them forever.”
Posted by Chad Smith at 8:19 PM No comments: