Wow. The old saying "you never think it can happen to you" is unfortunately resonating with me now. On Monday night, a man armed with a gun shot to death three people, including a person I know -- at a municipal meeting in Ross Township, Pennsylvania. Ross Township was a township that I used to cover when I was working at the Pocono Record. Four townships were under my charge; Ross, a rural community with rolling hills and long country roads, was one of them.

Sadly, I know that gun violence is endemic in America. But you're not prepared -- just as many say -- when it happens to you or people you know. And, to top it all off, the reporter who was hired to replace me was at the meeting and barely escaped with this life.

Anyway, in recent days, I've done a lot of thinking, especially about one of the victims. I knew him personally, as he was a township official with whom I often worked. His name was Dave Fleetwood. But let me not go any further. Below I'm going to copy what I wrote in my journal on Tuesday, the night after the attack. I wrote the entry -- which focuses mostly my interactions with Dave -- sitting in my kitchen late at night. The text is verbatim. I hope you get something out of it.

Well, what can I say. Today I got some fucked up news from the U.S. I learned that a gunman stormed the Ross Township building during a monthly supervisors meeting and killed three people, including someone I used to know. The gunman killed Dave Fleetwood, who is the supervisor of Chestnuthill Township and the zoning codes officer of Ross.

But anyway, yeah. I'm stunned and sad. Real sad. This guy, Dave Fleetwood. He was a good guy. He liked to joke around, in his funny dry way. I spoke with him several times and was really hoping that he wasn't going to be one of the victims. But he was. When I learned today that it was Mr. Fleetwood who in fact was killed, I yelled out "fuck." I didn't even mean to yell that. It just sorta came out.

Anyway, I just can't believe he's gone. I don't know. Dave wasn't that outgoing, but he definitely acknowledge me when I would show up to meetings while working for the Pocono Record. Some supervisors, believe it or not,  wouldn't acknowledge me. But Dave did. I also remember he gave me a story tip. I had showed up to the Ross Township building one day looking for someone but they weren't there. But Dave was there and he recommended that I do a story on the E-911 readdressing stuff. I said that I'd look into it and did. The story didn't materialize because it had been done. But still. It was nice of him to have given me a tip.

One of the strongest recollections I have of Dave is also, ironically, one I can't exactly remember. It was at the Chestnuthill Township building and it was at night. Oh, wait, I think I know what happened. I showed up to the Chestnuthill building at around 8 p.m. in early April. It was for a supervisors meeting and it was a rainy night. When I got there, I saw through a glass door that no one except the supervisors was in attendance. Anyway, all the supervisors were sitting at a long table at the front of the room, the town-hall room. They were sitting under a light, talking. The door to this town-hall room was locked and I was outside, looking in, getting rained on. I knocked on the door, which, again, was made of glass, and Dave Fleetwood, who along with the other supervisors was able to clearly see me, pretended he couldn't hear or see me even though he and the other supervisors obviously could. (They had a direct line of site at the glass door, which was about 15 feet from their table.) And so I, the unfortunate butt of this little joke, stood for a few more moments in the pouring rain. Eventually, one of the supervisors -- it might have even been Fleetwood -- got up, let me in and we all had a big laugh about it.

Another memory I have of Fleetwood: I was at another meeting and there was a heated discussion going on and I was sitting in the front row and I wanted to ask a question but for some reason I couldn't. Dave, who was sitting at the head table in front, saw on my face that I wanted to ask a question and he actually knew from the context what the question was. Once he got all this, he actually interrupted the meeting and said, "But wait. I think Chad wants to ask a question and I think I know what the question is." He did, and answered it. I remember being very impressed.

Two other people were killed in this attack that claimed Fleetwood's life. But Fleetwood was the only township official. The other folks were regular citizens. The gunman, apparently, was someone who had a long-standing feud with the township. I guess the township condemned his property or something. The Pocono Record quoted the gunman as saying he wish he would have killed more people. A Pocono Record reporter was even at the meeting! My replacement!

But anyway, yeah, Dave Fleetwood. I'm really sad. And the gun culture in America...something really needs to be fixed. But Dave was a good guy. And now all this. And now all fucking this. 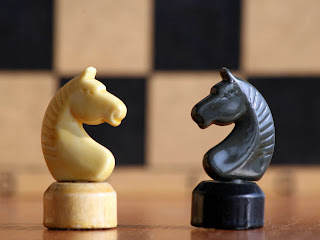 Today, I had the coolest little experience.

I was sitting in a cafe with a cup of coffee, trying to kill some time. I had an appointment at 11 a.m. but it was only 10:15, and so I decided I’d hang out at the cafe, get some coffee and play chess on my MacBook until I had to leave.

Now, the chess program that comes with the MacBook is very powerful, and I sorta have a rivalry with it. The program doesn’t make any mistakes, per se, so you really just have to overpower it to win. Your play must be sound and aggressive.

I had the white pieces and I therefore made the first move. After a few minutes the program and I were deep into the game and I was lost in thought. Just so you should know, the computer and I were in a “French Defense”-type position. In such positions, the board is pretty cramped with pieces and players are forced to do much maneuvering before any attack can be launched.

After move 12, I had gained the “initiative,” meaning I had a slight advantage and was controlling the flow of the game.

Anyway, so there I was, deep into the game and doing well, when this cute little kid -- he must have been 9 or 10 -- just sorta floated over to my table.

I really had no idea where he came from. He was a small, mixed-race boy with light-brown skin and frizzy black hair.  I think he walked into the cafe with a white woman.
At any rate, before I knew it, the boy was right beside me, looking at the game on the screen.

I didn’t really mind -- although, admittedly, having this curious kid right by my side was a little distracting -- and I just kept on playing. When I’m into a chess game, I don’t stop to talk with anyone.

But then he started talking to me.

“Spielst du Schach?” he asked, German for “Do you play chess?” I said, "Yeah." Then I asked him if he played. He said he also did, and we went on looking at my game.

I told him what I was aiming for, what my strategy was. My bishop and my queen,  I said, speaking in German and also using hand gestures, were working in tandem and were taking aim at black’s pawn on h7, the pawn right in front of black’s king.

After I told him my strategy, he recommended a move; he recommended that I use my pawn to chase away the black knight on black's kingside. After all, he reasoned, this knight was protecting the black king from checkmate.

I told my little buddy that I appreciated this idea, but if I actually put it into practice, it would be a waste of a move because the knight would be able to retreat to a square where it could still protect black from checkmate.

But then he said something really, well, sweet, I guess. He said in German, “Let’s just see what happens.” And even though I knew the move he was proposing wasn’t the best, I appreciated his curiosity, so I made it.

And, well, yeah. The black knight retreated to the exact square I thought it would. Yes, you could have called it a pointless move. But, then again, maybe the move wasn’t such a pointless one for my young friend.

At any rate, with the black knight now settled into its new defensive outpost I tried to find some other attacking moves. I found a few good ones, but I didn’t make any of them without consulting my little friend first.

And together, we forged on. I told him my thoughts on the game, he his.
I tried to find a way to win; I really did. But it was a bit difficult because, even though I wanted to make the moves I wanted, I also didn’t want to discourage this kid by not paying attention to his ideas. And so what wound up happening was I made some of the moves he recommended despite my better judgment.

And, well, because I did this, our initiative started to disappear. The computer stabilized its position and things began to look bad for us. But that was OK, I thought, because by that point, I had to leave the cafe and get to my appointment.

I told my friend that I had to go and therefore we unfortunately couldn’t finish our game. But he asked me to stay just for a little longer. He wanted to play more. I couldn’t help but find a few more minutes.

Owing to the fact that I knew the game was totally lost at this point, I let him take over completely. I let him make a move that invited a nasty check from the computer. Even though the consequences of making such a move were obvious to me, he was totally dumbfounded. But that’s OK.

My little friend, though, still didn’t think the game was over. But I told him in German that we were in serious trouble. “Uh oh,” I said,  “Wir haben grosse Probleme. “We have big problems.” I told him to look at the enemy bishop on c5 and how we would be in “discovered check” -- a very bad thing to be in -- once the enemy rook moved away from the square right near our king. The end was clearly close.

But still, my buddy was not discouraged. I pointed to the bishop and I showed him how the enemy had coordinated its pieces to checkmate us.  And then I said, “Guck mal. Wir sind tot. Aber es ist schoen.” “Look, we’re dead. But we’re being killed in a very elegant way.”

And so I moved, and then black moved its rook, just as I had thought, and indeed we were checkmated.

After looking at the screen for a few seconds, just to see exactly how the deathblow was dealt, the little kid joined his mom or guardian -- I’m not exactly sure who this  woman was -- and I said, “Chess is fun” in German, and he agreed.

I then cleaned up around the area where I was sitting and said goodbye to them both.

It was the coolest little experience.

Posted by Chad Smith at 1:36 PM No comments: