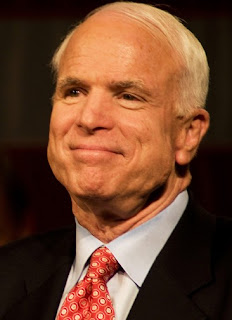 This is just going to be a small little note. Recently, as you know, John McCain died. Now I’m not immune to feeling a bit of sadness when famous people die. But lately, with the Internet and all, it seems like every five minutes we're learning that someone well known has passed away. All the information can have a numbing effect.

But I have to admit I felt a little something in my soul when I learned that John McCain had died. I really can’t say why. It just seems like he was a guy who was always there. During the last 20 years, as I have matured as a person and have become more and more interested in journalism and politics, John McCain was just always around. He was always in the news, always up to something.

And he was always a guy you couldn't help but root for. He had an amazing backstory, and he just seemed like the embodiment of American ideals.

In the paper today I read that John McCain had wanted “Danny Boy” played at his funeral. Here is my favorite rendition of the song.