Coronavirus Blues, or Between a Rock and a Hard Place

"Is this where the line starts?" the man asks.

"Thanks," the man says, and gets on line behind Chad.

A few moments go by.

"You know..." the man says, "they say that the masks aren't safe, that they might even be worse for you, because you're constantly breathing in the same air."

"But it's times like these we could all use a little comedy," the man says.  "You wanna hear a joke?

"OK," the man says, a man who Chad notices is about Chad's height, which means that if spittle from this man goes flying, there's a good chance it will land on Chad's mouth.

The man begins his joke: "So my daughter, she was saying that she likes Cinderella and she wants a Cinderella birthday party."

"I said, 'OK, sweetie, now we're all going to go out and you can stay home and clean!'"

Chad laughs, because the joke is funny; however, at the same time, Chad notices that the woman in front of him in the surgical mask is eyeing him down. Chad thinks that she must be thinking, "Why the fuck are these two men, both of whom aren't wearing protective masks, laughing?'" The woman does not look friendly. You can hardly see her face because one half of it is mask, the other, bifocals.

The lines moves forward a little bit. Chad is happy about that, very happy. You see, everything else notwithstanding, joke-man has this little idiosyncrasy. When he tells his jokes, he unconsciously moves toward Chad and Chad, remember, really does not want the man's spittle on him.

The line moves a little more.

"Hey," the man says, "since we have a minute or two, can I tell you another joke?" The man sounds so nice when he asks. His tone is almost like one might imagine Oliver Twist's to have been when he uttered that "s' more" line. How could you say no?

"Well, OK, one more," Chad says. But Chad now has his back nearly completely to the man, hoping the man will take a hint and not move too close.

The man begins to tell the joke, and again he begins to get closer and closer to Chad. But this time, as Chad tries to move away, surgical mask woman looks at Chad and then makes a gesture with her hand, one that is universally understood to mean "halt."

Chad can't believe it. How fucking rude, he thinks. Dude behind Chad is still telling the joke, something about a Victoria Secret model and lingerie, but all Chad can think about now is how he's got this woman and this man to worry about, and what the fuck is he going to do?

The lines moves. The man continues to tell the joke and Chad laughs, thinking that the man has arrived at the punchline, but Chad just laughed at something that wasn't even the punchline. The man doesn't even care, though. He just keeps telling the joke with the same gusto.

"Cash or credit?" the supermarket guy asks, interrupting Chad out of his now mild state of panic.

As Chad leaves the store, he think's of a figure of speech, "to be between a rock and a hard place."

Wow, Chad thinks, that really was like being between a rock and a hard place.
Posted by Chad Smith at 7:01 AM No comments: 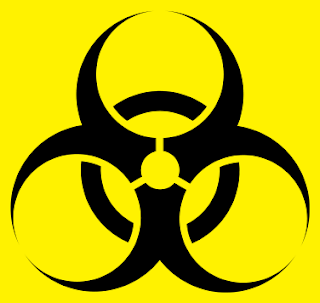 Yesterday, Martina and I went to a local park to play basketball. However, when we got there, we were super disappointed. The local government had hung up a sign at the park's entrance saying that the park's basketball courts were closed due to the coronavirus. If this sign wasn't warning enough, there was yellow caution tape blocking off the courts.

What a bummer, Martina and I thought. Basketball had been a refuge from all the craziness, and to have it taken away, too, was very frustrating.

However, today, around 10:30 a.m., Martina said that she wanted to go for a walk. It was still kind of early for me, so I teased her: "Oh," I said, "you want to get some exercise, do you? Sure, we can do that. We can actually go running!"

Martina wasn't too keen on the idea -- she really just wanted to walk -- so I thought we could split the difference. I figured we could take a basketball with us and walk one town over, to New Hyde Park. I thought that this was a good idea because we would get to walk and perhaps play basketball, so long as the courts in this town were still open.

We then entered the school grounds and walked onto four pristine basketball courts -- courts that I used to play on in middle school but had since been refurbished. Martina and I couldn't believe it. We spent about an hour and a half playing on these beautiful courts.

Friggin' score!
Posted by Chad Smith at 6:15 AM No comments:

Sometimes when I play chess, I go on losing streaks, and when I do, I hate the game. It just seems so frustrating. After all, I have been playing chess for nearly two decades now, shouldn't I be winning-- and winning a lot?

Posted by Chad Smith at 6:26 AM No comments:

Your love is bright as ever...

When I was growing up, we would learn about JFK, and I remember seeing that famous black-and-white photo of Jacky O. after the assassination, the one in which she’s standing beside Linden Johnson as he’s being sworn in.

Even in the shadows...

I remember how that picture of her, grief stricken, mouth turned down, stood in such contrast with other pictures I had seen of her.

In the other pictures, she had been happy, full of life, smiling—smiling with her family and the man she loved.

I was reminded of Jacky O. and just how different we, as people, can actually look depending on the circumstances, while watching the memorial service for Kobe Bryant yesterday.

Your heart is glowing...

And I'm crashing into you...

How could I not be reminded of seeing the smiling face of Vanessa, of seeing her in happy moments on the floor of the Staples Center, during one of Kobe’s many triumphs?

Vanessa, with that pearly white smile, too . . .  a smile that, as she even said during the memorial, took up her whole face.

But yesterday was different. Yesterday, her mouth was turned down and her face was heavy with grief.

And seeing Vanessa like that and comparing what I was seeing with how I had seen her in the past, I couldn’t help but think to myself: this is what it must have been like, in one way or another, when JFK died.

Here's just a nice win using some of the things I recently learned about the King's Indian Defense. I have the black pieces. My favorite move is 13...e4. Enjoy.