I don't usually endorse any bands or recommend music – frankly, people have such different tastes when it comes to music that recommendations often fall on deaf ears.

there is one band out there really worth recommending: Keane . This isn't some wild discovery, they have been out for a while. Still, I think they deserve a nod. Who are they? Three guys from the U.K., and they're drums, bass and vocals. Thankfully, Keane isn't corny like some other guitar-less trios(Ben Folds Five, anyone). Their melodies are sweet and their lyrics hold up (something rarely seen today).
Have a listen, if you would.
Posted by Chad Smith at 11:14 PM 1 comment: 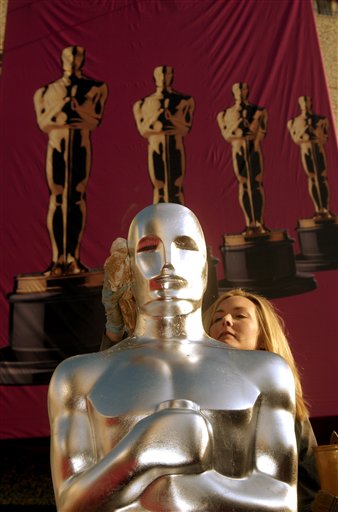 Did you think that Oscar night was a crock of shit, too? Maybe you just thought the Academy's choosing of "Crash" for best picture was about as ingenuous as, say, the National Socialists' explanation of the Reichstag Fire. Maybe. Well, either way, just listen to what Anne Proulx, author of Brokeback Mountain, had to say about that gala night.
Posted by Chad Smith at 8:04 PM No comments:

Baghdad, Iraq, March 11 — Tom Fox, the kidnapped American peace worker whose body was found this week, had apparently been tortured by his captors before being shot multiple times in the head and dumped on a trash heap next to a railway line in western Baghdad, an official at the Iraqi Interior Ministry said Saturday.

This lead from today's Sunday New York Times says a lot. In a sense, it epitomizes the situation in Iraq: merciless, animalistic and bloody. No matter what your politics, one must admit that this war is consuming far too many lives. And I'm sick of it. I'm sick of reading the newspaper every day and seeing the names of the dead. I'm sick of the apathy many Americans – especially those in my age group – express toward the war. I'm sick of blaming the president or vice president for all these woes. I'm sick of not being able to do anything about being sick.

But, then again, it's really not about me. It's about Tom Fox's daughter, who, for the rest of her life, will have to live with nightmares of terrorists torturing, then killing, her father.

It's about all the American families who have lost sons or daughters at the cruel hand of this war.

How can one justify these deaths or these shattered lives?
Posted by Chad Smith at 10:03 PM No comments:

Came across this interesting, albeit lengthy, article about Marueen Dowd in the Guardian. It covers everything from Judy Miller, to Dowd's feelings about "truthiness," plus all her feminist musings. It's worth looking at.
Posted by Chad Smith at 7:47 AM No comments:

Last week, looking to blow off steam, I visited the "Comedy Cellar," a comedy club in the West Village. The Cellar is known for nurturing talents like Dave Chappell, Colin Quinn and Dave Attel. Needless to say, the club's comedians aren't politically correct. Therefore, it came as no surprise, that after 15 minutes, one of the night's comedians was already headlong into a set about international politics. And he had a real snide tone.

He began a joke with these words: "Oh yeah, and will someone tell those Muslims that those cartoons --" however, he didn't make it to the punch line. Instead, a young Muslim girl in the audience cut him off. She had anticipated the nasty punch line about her religion, and she told the comic that, essentially, whatever we was about to say was "in poor taste." The comic, not too happy about getting cut off by a member of the audience, bit into her a little bit with a few jokes. He also rebutted the Muslim girl's comment by saying that he's "allowed to make fun of Muslims because, earlier in the night," he had already "made fun of Jews and Blacks." Why should Muslims be excluded, he asked?

But here are my questions:

A) Should she have cut him off in the middle of his joke?
B) Should comics avoid these issues during such emotionally tense times?
C) In a larger sense, how much self-censorship should the West practice when it comes to these issues?
D) Although the comic made fun of Jews and Blacks earlier in his set, he told those jokes with lighthearted irony. However, when the comic began to tell the joke about the Muslims, based on my analysis of his tone, there was this sense that he really didn't care too much for Muslims. In other words, he began to tell the joke about the Muslims with a "what's-wrong-with-these-crazy-people tone of voice. It was almost as though the Muslim joke was in a different category from the Jewish and Black jokes, because – again, through what I sensed in his tone – he felt that Muslims really were crazy. If this is the case, was the girl justified?
Posted by Chad Smith at 8:06 PM No comments:

The Pen and the Sword

What makes a great movie? Tons of laughs? A fright? Misty eyes? How about if the movie leaves you shaken, feeling introspective or disturbed. Is it still great? I think it is. That's why I highly recommend "Sophie Scholl:The Last Days."

The movie's about the last days of the anti-Nazi, free speech martyr. The movie's heartbreaking because it's a true story, written around newly released East German documents.

In 1943 Sophie Scholl and her group of friends, The White Rose, were furtively distributing anti-Nazi leaflets at the Munich University. I'm talking about some serious totalitarian blasphemy. They get caught, are sent to Gestapo headquarters and are interrogated. The thrust of the movie is Sophie's interview with her Gestapo interrogator. She proves unshakable. She's believes in freedom, love and peace—pretty much the antithesis of anything the Nazis believed in. The movie is unrelenting suspense, although anyone who knows what the word martyr means, knows how it ends.

Above all, "The Last Days" is a stark reminder of how crushing life can be when liberty is lost. However, the movie is also a testament to how good, whether ethereal or tangible, somehow always triumphs over hate.

Feel something. See it.
Posted by Chad Smith at 5:29 AM No comments: