You know, sometimes it pays to have a little faith.

The other day I was in a flower shop trying to decide which flowers I should buy for my girlfriend. She had told me that she likes lilies, but the only lilies in the shop hadn’t opened yet and didn’t look very appealing.

Surely, it was a better idea to just buy roses. After all, the roses had already opened and were quite beautiful.

But my girlfriend had said that she likes lilies, and even though I had no clue what the lilies would look like once they opened up – in the shop they just looked like green stalks with green buds on the end – I bought them anyway.

The lilies have since opened and every time I see them in my kitchen, I can’t help but think how beautiful they are. The petals are red with black tiger spots and the flowers themselves just have a very striking shape.

I’m sure my girlfriend would have been happy with the roses had I chosen to get them. But I’m glad I trusted my gut. The reward was much greater.

A while since I heard that one Living in Germany, I always get the same question from people: Do you miss the United States?

And I always tell them the same thing: Not desperately, but sometimes I do, yes.

Well, something happened the other day that definitely made me miss the U.S.

I was in a class teaching English and one of my students — he was a clever guy, who I think had spent some time living in New York — said a phrase that I hadn’t heard in a long time.

See, for some reason, another student had asked me what would happen if she got caught cheating on a test in the United States. Would the teacher fail her automatically, she wanted to know, or would the teacher give her a second chance.

And there it was. “Do not pass 'Go,' do not collect $200.” Wow, it had been so long since I had heard someone use that phrase, at least in a sarcastic way.

Now, don’t get me wrong, people in Germany speak English very well. They can hold normal conversations as well as sophisticated ones. But there are certain words and turns of phrases that only native speakers use or are aware of.

Hearing the phrase after not having heard it for so long just made me miss being surrounded by people who really spoke my language, who I could communicate perfectly with, who really understand the humor behind certain sayings and the import of certain words.

After the student said the "Do not pass 'Go'" phrase, he looked at me with an expression that seemed to say, “You like how I know that, right?”

And I guess, in the end, I sort of did. Though the phrase made me miss home, it also, if just for a moment, brought me closer to it.
Posted by Chad Smith at 4:30 PM No comments: 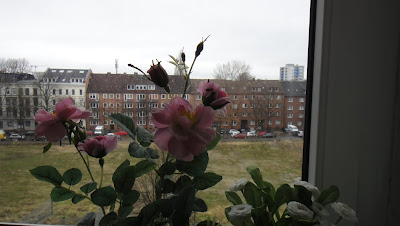 I'm not exactly sure how to describe the following post. Maybe one part writing exercise, one part diary entry? Whatever the case, enjoy.


I just felt like giving a rundown of my morning this Saturday, so here goes. Today I woke up at 7:45 a.m. For some reason, I have not been able to sleep past 8 a.m. for the last few weeks. In a way this is good, but sometimes it’s nice just to sleep late. After I woke up, I hung out in bed with Maya for a little bit, just talking. Maya and I often do this. We chat with each other about this or that before actually getting up. Today we chatted about where we might live one day. Maya said that maybe it would be a good idea to live in Montreal. After all, in Montreal, she said, she could speak French and still live in a European-like environment and I could write for an English-speaking publication. It’d be a win-win situation. I told Maya that Montreal wasn’t a bad idea and we discussed the possibly a little further. After that, we got up and had breakfast. It’s fun eating breakfast with Maya. We always get into pretty interesting discussions. Today we discussed how skilled the writers of the series "Suits" are at evoking pathos and how we can't help but feel bad for the show's bad guy sometimes. When breakfast was finished, we decided to take our dog, Filou, to the park for a walk. Although. . . I guess that’s not entirely true. At first I wanted nothing to do with walking Filou. It was raining outside and I just did not feel like subjecting myself to such weather. But then Maya said that she really didn’t want to go alone, and I caved. When we got to the park, we let Filou off the leash. Maya and I also usually have good chats when we're at the park with the dog and today was no different. As Filou pranced about in a wide open field, Maya and I talked about the importance of having strong relationships. I told Maya that I felt as though establishing strong relationships was a great way to fortify oneself against all the pain and heartache that exists in the world. Maya agreed but said that one has to be careful when in a relationship with another person. When I asked her what exactly she meant, she said, “In order to remain happy, you shouldn’t take on another person’s pain. You should feel bad for people when appropriate, but you shouldn’t take on their pain.” I told Maya I agreed with her but am not sure I really do. When we decided that Filou had had enough time off the leash, we called her back, put her on the leash and went home.

Posted by Chad Smith at 2:45 PM No comments: