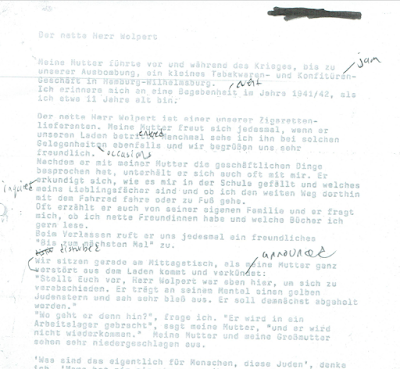 Recently, I have been researching a story about the 75th anniversary of the Bombing of Hamburg during World War II.  For my research, I have been meeting with people who survived the event. Actually, these are people who have not only survived the event but have also made themselves available to talk about it and any other event in history.  In Germany such people are called "Zeitzeugen," or contemporary witnesses. Zeitzeugen usually travel to schools and tell students how things were -- the good, the bad and the very bad.

Yesterday, I had a meeting with a Zeitzeuge, a woman who was about 9 years old when WWII broke out. We spent a few hours together at her home and she told me interesting things about the Bombing of Hamburg. However, I was more interested in some of the other stories she had to tell. Some of her best stories she had already typed out and had made copies of. Below is one the stories that she had already made a copy of. It doesn't a happy ending, but I do think it is compelling. The story was given to me on a sheet of paper in German. I'm going to translate it, of course, but I'm going to preserve her spacing. I hope you appreciate it.

My mother used to operate a tobacco and jam shop in Wilhemsburg, Hamburg. The small shop was attached to our house and it was my mom’s principal place of employment until a bomb destroyed our house.

Mr. Wolpert, a nice man, was one of the men who delivered cigarettes to the store. My mother enjoyed his presence every time he came by. Sometimes I would be in the store during his visits and Mr. Wolpert and I would greet each other.

After he had finished discussing businesses with my mom, he would talk with me. He would ask about school and he would ask me which of my subjects was my favorite and whether or not I got to school by bike or by foot. Often he told us of his family and he asked whether I had nice friends and which books I liked to read. Every time after he would leave, he would nicely say, “See you next time.”

One day we were sitting eating lunch when all of a sudden my mom walked in, really upset. She had just come from the store and she said:  “You’re not going to believe it, but Mr. Wolpert just stopped by to say goodbye. On his jacket he was wearing his Jewish star and he looked very pale. He said that was going to get picked up soon.” “Where is he going?” I asked, to which my mother replied, “He will be brought to a labor camp [“Arbeitslager”] and he won't be coming back again.” My mother and my grandmother looked very downcast.

“Who exactly are these people, these Jews?" I thought to myself. My mom never told me anything about them. On the afternoons I would go to the Hitler Youth, we were told that Jews were a dishonest and conniving people and were mostly money lenders and fraudsters. But that absolutely does not describe our Mr. Wolpert! Never!!

I cannot fathom it, I'm stunned.

We never saw him again.
Posted by Chad Smith at 4:45 PM No comments:

This week I have been asking the students in my English classes to write a small essay about a difficult decision that they’ve made in their lives. After the students submit their essays, I mark them and then give each student feedback on his or her writing. The whole process is relatively easy for me. However, I haven’t once stopped to think about how the exercise is for the students. Is it very difficult to write an essay in another language? To be fair, I decided to write the essay that I have been assigning, in German. What’s it like to write a small piece in another language? Let’s find out.

Phew. That was really hard. No joke. I thought it was going to be a little bit easier. But wow. It took me a good hour to get that as perfect as I could. I guess I should not be so cavalier next time I tell my students to just fire off an essay on the topic of my choice.
Posted by Chad Smith at 12:01 PM No comments: 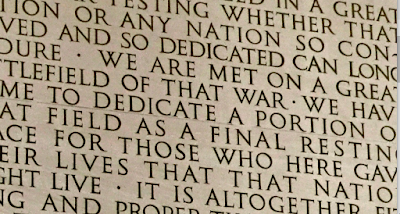 To show you exactly what I mean, I'm going to reproduce the super famous speech, or at least the part of it that relates most to my point, and I’m going to highlight the words that Lincoln uses to connect his ideas in subsequent pieces of text with those in previous ones.

I hope you find it all of  some interest.

Four score and seven years ago our fathers brought forth on this continent, a new nation, conceived in Liberty, and dedicated to the proposition that all men are created equal.

Now we are engaged in a great civil war, testing whether that nation, or any nation so conceived and so dedicated, can long endure. We are met on a great battle-field of that war. We have come to dedicate a portion of that field, as a final resting place for those who here gave their lives that that nation might live. It is altogether fitting and proper that we should do this.