A bit of untangling

You know those songs that just get you every time? The ones you never get tired of listening to? For me, Jim Croce’s “Time in a Bottle” is one of those songs. I hardly ever skip it when my iPod cues it up; it’s that beautiful. The melody, the lyrics: “If I could save time in a bottle/The first thing that I’d like to do/Is to save every day/'Til eternity passes away/Just to spend them with you.”

The lyrics are great and really force you to think about life and how you’re spending your time. But there has always been one set of lyrics in this song that I could not get my head around, so I figured I’d parse them here for fun.

Uh, what? You know, one tenet of writing is avoid using negatives, especially double negatives. For example, it’s bad form to write, “That’s not something I don’t like.” Such a sentence causes unnecessary confusion.

Well, if that’s true, then Croce definitely violates some rules with his lyric. I mean, “If I had a box just for wishes and dreams that had never come true? The box would be empty except for the memory of how they were answered by you”?

Every time I've heard this lyric, I've been like, “Wait...what?” But to be honest, it sounds like Croce is trying to convey something beautiful and deep, so let’s see if we can deconstruct the line. OK, so, first off, “If I had a box just for wishes and dreams that had never come true, the box would be empty...”

But wait. In the next breath, he actually says that this box of wishes and dreams that had never come true “would be empty except for the memory of how they were answered by you.”

Basically, I got all I wanted in life, but I didn’t get what I wanted from you. Crazy, line, huh? I guess the bottom line is this: Avoid writing in the negative.

The Bombing of Hamburg

You know, it’s interesting how we sometimes perceive things differently after having learned a little bit.
For example, many times when I would be walking around Hamburg, especially in residential areas, I would see these particular metal plaques on the facades of some red-bricked apartment buildings.
The plaques would read something like, “Destroyed 1943/Rebuilt 1955” or something like that.
And every time I would see these plaques, I would mostly think to myself, “Yeah, well, of course... Hamburg was bombed very badly during the war. Of course some houses got destroyed.”
But I recently read just how bad this city on the Elbe was actually bombed. A few weeks ago I picked up “Inferno: The Devastation of Hamburg, 1943,” and holy crap.
Usually, most people think that Dresden was the city most devastated by Allied bombings.
But the number of people killed in the Dresden bombings was somewhere between 18,000 and 25,000. The number of people who died during the Bombing of Hamburg, however, was about 42,000.
Shockingly, though, what makes the Bombing of Hamburg so terrible is not just the high casualty count. See, during the Bombing of Hamburg, which lasted about a week, from July 24 to August 3, 1943, the city was bombed nearly every single day.
But on the night of July 27th, the weather in the city was so dry and the Allied bombing so concentrated and accurate that a firestorm was created.
A firestorm is a humungous inferno that consumes everything in its path and is beyond human intervention. These blazes, which create and sustain their own wind systems, are so intense and suck up so much oxygen that the currents feeding them are as powerful as hurricane force winds.
As a result, after the Royal Air Force planes dropped their payloads that night, nearly every single building in an 8-square-mile section of the southeastern part of Hamburg burned.
According to “Inferno,” in this ground-zero zone, fires raged until the horizon in every direction, asphalt streets were turned into “flaming rivers of melted tarmac,” and fuel from destroyed ships spilled into canals, setting them alight, too.
And the human toll. Thousands of residents who had taken up shelter in their cellars died when smoke and poisonous gases from the fires outside poured into the supposed safe spaces.
Those lucky enough to have decided to try their luck on the streets had to brave blazing temperatures, dodge falling masonry and battle against storm-force winds as they tried to reach the city’s parks, the only refuge. Many people who allowed themselves to be pushed along by the winds, or couldn’t battle against them, were eventually swept into the fire.
As one Hamburger who, with this family who made the “good” decision that night of braving the streets to seek shelter in one of the city’s parks, recounts in the book:

[Once we got out onto the streets], we saw the first people burning, desperately running figures, who suddenly fell, and as we approached, were already dead. [Out on the street, on the way to the park], we had reached the first crossroads. Here we saw a building whose roof had, exceptionally, only just caught fire. In the entrance to this building we took shelter for a few moments from the storm, the heat, the whipping whirl of sparks and the glowing mounds of phosphor . . . Although we had only traveled a short distance, our lips were already badly swollen. Our throats were incredibly dry. Our legs felt weak . . .

All around, people fled from the burning buildings. Some came out with their clothes already alight; others caught fire outside from the sparks, the blazing heat or the phosphor. Again and again we saw burning people suddenly start to run, and soon after, to fall. After this, terrible cries were to be heard, but they, too, grew rarer. I saw many burning people who ran and collapsed in silence.

Though the raids continued on for a few more nights, with the British even again coming to bomb Hamburg as a thunderstorm raged over the city, on no other night were the bombings as intense as they were on the 27th.
In fact, a year after the war was over, Major Cortez F. Enloe, a surgeon in the United States Air Force who worked on the United States Strategic Bombing Survey, which sought to gauge just how effective the bombings in Germany had been, said that the fire effects of the atomic bomb dropped on Nagasaki "were not nearly as bad as the effects of the Royal Air Force raids on Hamburg on July 27th, 1943."
So do I take a little more time nowadays to think about what exactly I’m looking at when I see one of those memorial plaques on a redbrick apartment building in the city?
You bet I do. 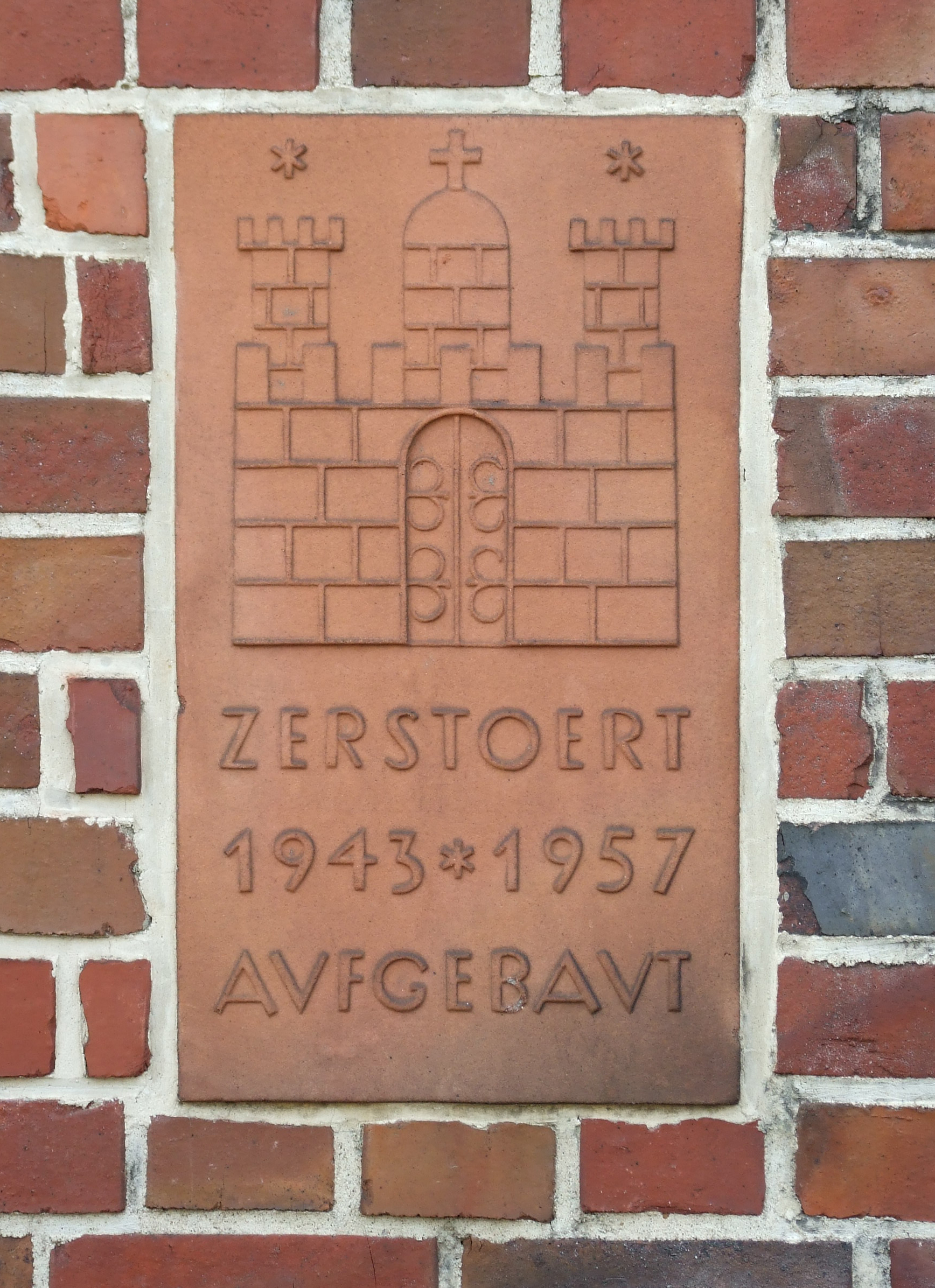