Here's a letter I wrote to the Wall Street Journal. It's about China's shady business dealings with Sudan, home of the Darfur genocide. The authors beg us to reconsider the 2008 Olympics, which will be held in Beijing, now that we have the knowledge that China, albeit in a roundabout way, is supporting genocide:

Mr. and Ms. Farrow raise some hard-to-escape truths about the dark side of Chinese politics and the coming Olympic Games("The Genocide Olympics," Op-Ed, March28). Beijing’s intransigence on Darfur has indeed been debilitating. And, as the Farrows argue, a country that facilitates genocide — however obliquely — should be reprimanded, not feted.

Shockingly enough, China’s faults in this case don’t end with irresponsible business deals with Sudan and a shameful U.N. record on Darfur. Some speculate that the Chinese intend to ease censorship laws for the Games. This policy is flat backward. The Olympics shouldn’t be the spur for freer speech in China — especially, that is, if Beijing intends to rescind those policies soon after. (Wasn’t it the Nazis, after all, who briefly dissolved all signs of overt anti-Semitism at the ’36 Games to give the pretense of a more peaceful society?)

And, while saying, as the Farrows do, that Mr.Spielberg’s participation in the ’08 Olympics could somehow be akin to what Leni Riefenstahl did in ’36 might be shocking, it’s not completely unfounded. Mr. Spielberg — as well as the multinational corporate sponsors now armed with this knowledge — need to take a fresh look at how they will deal with the problem. After all, this isn’t a small conflict of interest. This is genocide.
Posted by Chad Smith at 4:35 PM 1 comment: 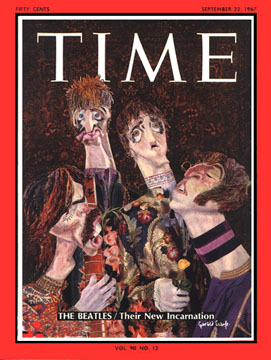 Really, have you seen the new issue? The "redesign"? It's pathetic. Trying to keep up to speed with today's "short-term-attention-span" culture, the 74-year-old publication has slashed the page count, shortened the features, and enlarged all pictures.

It's as if People got an upgrade. And for some reason decided to write about John McCain or Shiites.

TIME needs to realize that adapting to the culture shouldn't necessitate the product's diluting; especially, that is, if the product is an American touchstone.
Posted by Chad Smith at 11:31 PM No comments: