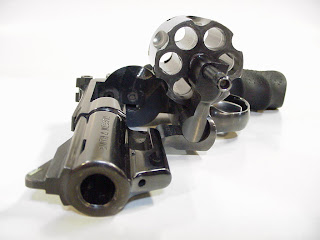 So on Saturday, I held my first handgun. I have to admit, it was a bit exhilarating. But the whole experience was a bit strange, too, and gives some insight into how I think.

I was working on a story that brought me to a pawn shop. The pawn-shop owner was super nice and helpful. I hadn't gone to the store to write about guns or anything like that, but when I expressed interest in the handguns that were in the back, in a glass display case, one of the shop's employees asked me if I'd liked to see any of the guns. I said sure. Then he asked me if I'd like to hold one. Again, sure.

First he allowed me to hold a black and silver Smith & Wesson, 9mm handgun. It was very heavy and the first thing I thought was, wow, this is a Smith & Wesson. This is, like, an American gun. Many Americans, I'm sure, take pride in this company.  After all, this is top-notch American manufacturing.

The pawn shop employee -- a super nice and bright kid -- told me about clips and safeties. He articulately explained the difference between automatic and semi-automatic handguns. (You have to keep squeezing the trigger for a round to fire on a semi-automatic.) I was grateful he never pointed the guns in my direction when he showed me their features.

Then we moved on to other handguns.

We got to a revolver. It had a rotating cylinder that held six bullets and looked sort of modest, sort of old-fashioned, if you will. He told me that several decades ago, police in the US used to use such guns. But to be honest, the only thing that I could think of was that this gun, this revolver he was showing me, looked incredibly similar to the gun that was used to kill John Lennon.

Lennon was killed by a Charter Arms .38-caliber revolver. I once saw a picture of this gun. I remember a feature that stuck out to me was the shortness of its barrel. The barrel of the revolver that the pawn shop employee was showing me was also incredibly small -- shorter than a pinky, really.

The next thing that the pawn shop employee said about this particular revolver, which he'd put down on the counter, perturbed me a bit.

He said that such a revolver isn't that accurate because it has such a short barrel. He said that you have to be really close to your target, when using this gun. Otherwise, your chances of hitting the target aren't really that great. I thought about how John Lennon's assassin stood about six feet behind him.

We moved on. It was really interesting to see how small some guns are. Heavy, but small. He showed me a Glock, an Austrian-made gun. He told me that Glocks are very durable and dependable. They cost about $250, used. I couldn't help but be reminded of the many rap songs -- I used to listen to rap -- which mention Glocks. So these were Glocks, huh.

I held a few more handguns, even pulled the slide back on one. I asked which weapon was the top of the line, and he showed me a small black pistol, which was pretty heavy. He said that this pistol, which was made by Springfield Armory, had three safeties on it. He liked this feature because, well, safety, is important.

I agreed. But all I could think about was the fact that in the summer of 2011, a drug addict in Long Island, who wrote on his Facebook page that he loved Springfield Armory guns, walked into a pharmacy and cold-bloodedly murdered four people -- a teenager, a 33-year-old woman, the pharmacist and an old man -- with a gun made by Springfield Armory.

Sure, it was exhilarating holding a handgun for the first time. Frightening, too.