Ever notice how hard spontaneity is to capture? Anyone who has ever tried to take a candid photo of someone else can tell you about this. There is something so difficult about capturing the human condition the way it actually is.

That's why I wanted to post the recording below. It's of a jam session that I recently had with my friend Chris and my girlfriend. The three of us were trying to add lyrics to a melody that my girlfriend and I had already created. Although the end result, the song, really isn't that impressive, the recording definitely captures something unguarded and real, something spontaneous and true. Enjoy.

A bit of appreciation

In addition to writing a blog as a hobby, I also write songs. The first song I wrote was at 19, for a girlfriend. However, it wasn’t until 2017 that I began writing songs more seriously. I must have churned out almost 10.

One tune I wrote in 2017 was called “You Gotta Say Grace.” It’s a song that reminds the listener to be thankful for the small but amazing things that occur in daily life and to try not and overlook or disregard them.

The first line of the song:  “Sometimes/In our lives/We fail to appreciate.”

And it’s true. I mean, how often do we stop to appreciate that our bodies are working properly or to enjoy the feeling of warm sunlight on our skin? It’s super easy to get lost in routine and in the discomforts of having to perform certain routines.

For example, this morning I went for a walk with my dog at the dog park. It was around 6 a.m. and all I could do really, or least initially, was focus on how tired I was and how biting the wind was. But after some time at the park, sitting at a bench and playing fetch with the pup, I realized that I was “failing to appreciate.”

So I had an idea. Because I’ve been into birds lately -- have a look at one of my recent blog posts -- I thought I would write about all the birds I saw during my walk to and from the dog park and where I saw them. Such an exercise, I thought, could be fun and would help me renew the promise I made to myself when I wrote “You Gotta Say Grace.”

OK, so. . . after I left my apartment, the first bird I saw -- one that I see everywhere in Hamburg -- was a Eurasian Blackbird. It was walking on a large lawn adjacent to an apartment building, foraging for food. Eurasian blackbirds, the males at least, are small, have black plumage and short yellow beaks. Thanks to a memory game I recently got on birds, I knew that the blackbird that I was looking at on the lawn -- based on its appearance, brown plumage instead of black -- was a female. Pretty cool.

At the park -- a really pretty park I should add, one that is right on the Alster -- my dog lunged at something that had been on a railing that I was leaning against. I had been looking down at my iPod before my dog jumped forward, but when she did, I looked up to see a crow flying away.

After the park, I decided to walk down a street that I don’t usually walk on because I wanted to get rolls from a bakery. At one point, I paused before a sign in front of a house that was actually a veterinary clinic. As I stood there reading the opening hours -- it’s always good to know the opening hours of a nearby vet when you have a dog -- a small little bird flew onto the waist-high metal fence in front of me.

I had seen this bird before, but it wasn't one I see often. It was very small -- maybe a little bigger than a sparrow, but rounder, one might even say bulbous, almost like the shape of a Hostess “Snoball” -- and was mostly tan, though its plumage was a blood orange red around the chest and face. It was a European Robin.

Still on the same street, while looking up at one of the many nice, 3-story apartment buildings facing it, I saw two Magpies, one of which was hopping along on a balcony.

Once I got to the main street, I saw one of my favorite birds: the Eurasian coot. I like the Eurasian Coot for two reasons. One, though it’s black, its distinctive white bill and the nub above it, located between its eyes, are white, which makes the creature look like it’s wearing a Phantom of the Opera mask. I get such a kick out of this feature and the bird's overall appearance. Two, this bird is out in all weather -- even in the coldest days of winter. When the swans are all gone and the ducks aren’t anywhere to be found, you can still find the Eurasian Coot out, dutifully motoring around. Because the bird is so rugged and so often "on the scene" I've come to think of it as a real hard worker -- a "grinder," and I this is an attribute I can relate to, though of course I'm anthropomorphizing.

After the bakery, I headed home, and on the street leading to my apartment, I saw a pigeon fly up onto the roof of a two-story house. However, this pigeon wasn’t your average pigeon. No, it was a wood pigeon. Wood pigeons are like common pigeons that have received an upgrade. If the common pigeon -- also known as the rock pigeon -- were to be dusted off and began doing yoga -- it would look more like the wood pigeon.

So there you have it, a normal walk transformed. The walk could have been just a routine thing. But what fun would there have been in that? “Sometimes/In our lives/We fail to appreciate.” I think this time at least I succeeded instead.
Posted by Chad Smith at 10:44 PM No comments:

“Stadt, Land, Fluss” -- or "City, Country, River," -- is the name of a popular game here in Germany. To play it, you take a piece of paper and at the top write five or six categories. The categories are divided from each other by vertical lines. The first three categories must always be “City,” “Country” and “River” -- hence the name of the game. The other categories can be decided upon, but players usually go with, “Animals,” “Colors,” “Famous People” and "Professions."

So, for example, if the player who had been saying the alphabet to himself  says he was up to the letter “S” when his opponent said "stop," all the players would then have to fill in each of their categories columns with a noun that starts with "S." For each entry you get correct, you get points.

Yeah, except there’s just one catch. The rivers. The rivers always snag people. People can think of a few rivers, but really not that many. Knowledge of rivers is gold in this game.

So why am I writing all of this? Well, I have a student who loves to play “Stadt, Land, Fluss” with me. Every time we play it, it’s like she’s playing the game for the first time; it’s all brand new, and I love that, find it very encouraging. The problem is, though, both she and I always get snagged at the rivers. It's hard to name rivers!

Well, last time before we started to play, a light bulb went off. I said to her, "Why don’t we memorize a river for every letter of the alphabet?  Well, we did that and the list we came up with is below. I hope to learn all 26 rivers and then be a champ at this game. I mean, the "Zam River"? Who's going to know a river starting with the letter "Z," let alone the Zam River (which is in Romania, by the way)? 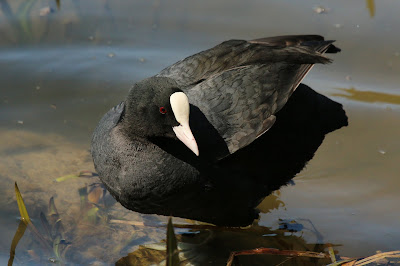 I once told a friend of mine that I was able to imagine myself becoming interested in birds when I got older. My friend and I would often laugh at this thought, picturing me as a gray-haired man with binoculars around his neck, on the lookout for beautiful winged creatures.

To this friend’s and my surprise, I’ve actually gotten into birds a lot sooner. The interest was spurred by having had the opportunity to observe the swan, geese and other waterfowl in the waterways near my home. Especially exciting was having had the opportunity this spring to observe a bird called a
Eurasian coot (pictured above) build her nest, roost on her eggs and then tenderly care for her chicks after they were born.

Below you will find an email I recently wrote to my mom about my new interest in birds, along with her response. My mother had always liked birds, but I never really paid attention when she would tell me about the ones that she had seen on her travels. I only paid half attention to her, like when she would tell me about the different types of flowers she had bought for her balcony. But now, of course, I’m paying attention.

I hope you see, as I do, the bit of poetry in this email exchange. Enjoy.

I forgot to tell you but recently I've gotten into birds. For my birthday I even got a bird memory card game and I was so excited when I learned my first bird. Remember when I told you this one bird looked like the Phantom of the Opera, with a white mask? Well this bird is actually called the Eurasian coot. You should look it up. I also now can identify a Eurasian sparrow, both male and female, and a Mallard duck and a mute swan.

I think getting into birds is really cool.  They're great.  I checked out all the birds you mentioned and the Eurasian coot really is the "phantom" of birds.

When I go to Wakodahatchee Wetlands, I see wood stork, multiple varieties of herons, great white egrets, anhingas and other great birds. Sometimes there are so many great blue herons in the trees, they look like ornaments.  That's why I drive 70 miles round trip two to three times a week.  I've watched the storks build their nests this year, with two of them fighting over branches.  I saw the eggs and then the sweet little babies.

Send me the names of any other bird that you identify.  I'll definitely check it out.

Love,
Mom
Posted by Chad Smith at 5:41 AM No comments: