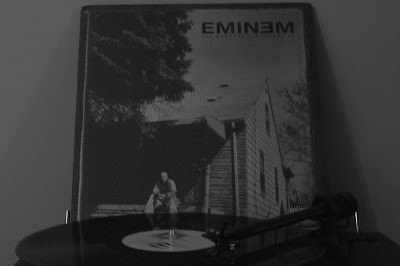 I love this WhatsApp message I sent to one of my students today. Good times.

This song is very special because unlike "The Way I Am," there's not one superfluous word in it; each word, more or less, tells something, is integral. Also the song is written in the style of a letter. So, the first three fourths of the song is written by an obsessed fan named Stan writing to Eminem -- even though it's just Eminem himself singing -- and the last verse is Eminem replying to this "obsessed fan."

Just for technical purposes, in case you're interested, "Stan" is what's known as an "epistolary" song -- meaning, it uses a series of letters rather than narration to tell a story.

This is actually very sophisticated stuff, Marina, right up there, in my opinion, with the Beatles' "Eleanor Rigby," another very literary minded song.