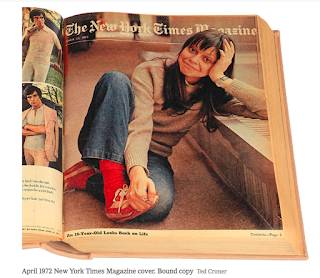 All of us were born with gifts. I think one of mine is being able to touch people, in a sense, with my writing.

I hadn’t always known I had this gift. I think I started to realize that I had something good going for me, though, in 1997 or so.

That’s when I sent a poem that I had written about John Lennon to Yoko Ono, at the Dakota. The poem was called “The Night” and it was about the tragedy of John Lennon’s death.

A few months after having sent the poem, Yoko wrote back. On a postcard of her strolling with John through Gibraltar on their wedding day, she wrote, “Dear Chad, Love Yoko.”

OK, I thought. That's something. I mean, I wouldn’t discover that I loved writing for another six years, but OK.

Skip ahead to today. Now, because I have been reading “The Catcher in the Rye” with two of my students, I have had it on the brain and decided, therefore, to google "J.D. Salinger" during lunch today.

One of the results that I got after punching in the name was a link to a New York Times Op-Ed written by the writer Joyce Maynard.

Some backstory: In 1972, Maynard [pronounced MAY-nard], who had been attending Yale, published an essay in the New York Times called "An 18-Year-Old Looks Back on Life." A photo of her was published along with the essay.  Apparently, J.D. Salinger, who was 53 at the time, read her piece, wrote her a letter and the two began corresponding.  Ultimately, the 18-year-old Maynard dropped out of Yale and went to go live with Salinger, in New Hampshire, becoming his girlfriend and muse.

Naturally, the the relationship made headlines. However, the two broke up after only seven months, with Salinger basically telling Maynard to pack up all her stuff and hit the road.

About 25 years over the breakup, Maynard, now fully aware of her naivety, wrote a memoir in which she mentioned aspects of her and Salinger's love life and painted Salinger as an unfavourable character in many respects.

And the press skewered her for it. She was called every name in the book, and the memoir was panned.

And in a sense, one can understand why. I mean, J.D. Salinger was the guy who wrote everyone’s favorite book and valued his privacy over all else, and here he was being dragged through the mud, in a sense.

Anyway, the Maynard piece I read over lunch today was written much more recently, in September of 2018, and in it, Maynard, who went on to have a very successful writing career, questions why no one ever really reached out to her when the #MeToo movement began. Why, after all these years, she wondered, had her story -- naive 18-year-old girl drops everything to live with a much older, powerful man only to get maltreated -- not struck a chord.

The piece was great. So good, in fact, that a few minutes after I read it, I went to Maynard's homepage and, through it, wrote her a tiny little note:

I just read your September piece in the New York Times about Salinger and about "predators" and "prey." I just wanted to let you know that I found the piece incredibly compelling and so very interesting. Also, your prose was so clear and forceful, I almost felt you were talking straight to me.

I wish you all the best.


And would you know, not two minutes later -- literally, two minutes -- she had already written back:

Thank you, Chad.  Although I have published hundreds of essays -- probably thousands, that one meant a great deal to me.