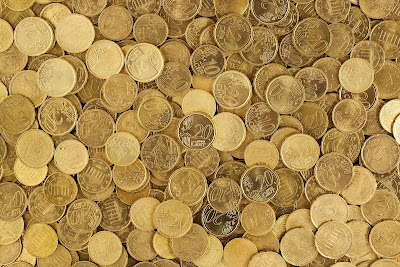 I saw him on my way in, and I hadn’t given him much thought.

But on my way out, I had just eaten creamy lentil soup, which I had continually dipped my falafel into. I felt revived, and this time he was making eye contact with me.

It had been raining and had lightened up, but more substantial rain was starting to fall again. I walked a little bit past him, almost like I was going to pass, but then I stopped and opened my backpack and began rooting around in the pocket where I keep my money.

Come on, Chad. Sometimes it’s just that way ... We all have lucky days.

With a two euro piece in my hand, I walked over to the man and dropped the money into his cup.
Posted by Chad Smith at 7:52 PM