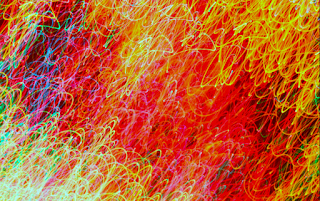 Here is a very interesting story from my past, one that shows that life truly is chaos and that we really never have all that much in our control even though we think we do.

In the summer of 2015, I had been giving English lessons regularly at the airplane manufacturer Airbus, in Finkenwerder, Germany. One day after class, one of my students, a mechanical engineer, asked if I’d like to have a deeper, more thorough look at one of the planes in the Airbus fleet, the A-320 passenger jet. I said I would, and he and I then set off to one of the many massive hangers Airbus has on its sprawling premises.

Inside the hanger, we walked up to the A-320, a sleek, single-aisle aircraft known for its versatility. After pointing out a few recent advancements that had been made to the plane's tail and wings, we climbed a set of metal stairs and went inside the aircraft.

Right away, I was attracted to the cockpit and wanted to have a look inside it. The cockpit was small, smaller than I had imagined, and filled from top to bottom with all kinds of buttons and screens and gears. It was pretty cool.

As we were leaving cockpit, my student put his hand on the cockpit door. “It’s very strong,” he said. “Once the pilot locks it, no one’s getting in.” I knocked on the door myself, appraising its sturdiness.

Of course, my student -- who really had become my tour guide -- mentioned the door due to 9/11. I'm sure he had thought it would be interesting for me to know that cockpit doors nowadays were super sturdy. And it was interesting. I was glad that improvements had been made to airplane cockpit doors, so that nothing like 9/11 could ever happen again.

Sadly, though, this experience with the student was thrown into a totally different light when only a few months later, the copilot of a Germanwings plane en route from Barcelona to Düsseldorf locked the captain out of the cockpit and crashed the aircraft into a mountain, killing himself and the other 143 people on board.

Life truly is chaos.
Posted by Chad Smith at 8:38 AM