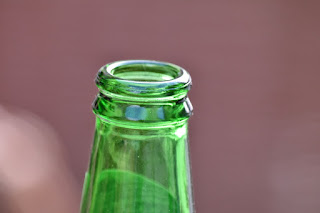 Last night I had some strange dreams. At first I was in some sort of room, and I was trying to convince my mother that a type of evil was present. To be more specific, I was telling her that there were two bottles, one that contained evil and one that didn’t. I said that it was important that the evil that was in the one bottle stay there. I tried to stress how important it was to see to it that that bottle never be uncorked. Another man who was in the room with my mom and me had the bottle in his possession and was able to control it from opening up, but for everyone's safety, my mom needed to believe that the evil existed.

Act II of my dream opened up on a snowy road. My mom was in the dream again, but the circumstances were different. This time, she and I were in Finland. I wasn’t thrilled about being in Finnland, but I eventually resigned myself to the fact I was in the country. Snow abounded, and my mother and I were in a taxi. We had been in the taxi for what had felt like hours, and I remember thinking that the fare was going to be a small fortune. I was taking pictures from the inside of the cab, and I can remember one picture I took. It was of a man standing on his balcony. I thought that the picture was cool because in it you could see the moon at the bottom of the frame and the sun at the top. I remember thinking, “This picture is so Finnland. Leave it to Finnland, of course, to have the sun and the moon in the same shot at the same time." Though the picture came out a little blurry, I uploaded it to Instagram and shared it with a friend of mine, Bettina, who loves Finland.