What beautiful symmetry. It’s the same sentiment.
Prince:
If I gave you diamonds and pearls
Would you be a happy boy or a girl
If I could I would give you the world
But all I can do is just offer you my love.
W.B. Yeats:
Had I the heavens' embroidered cloths,
Enwrought with golden and silver light,
The blue and the dim and the dark cloths
Of night and light and the half light,
I would spread the cloths under your feet:
But I, being poor, have only my dreams;
I have spread my dreams under your feet;
Tread softly because you tread on my dreams.
Posted by Chad Smith at 12:28 AM No comments: 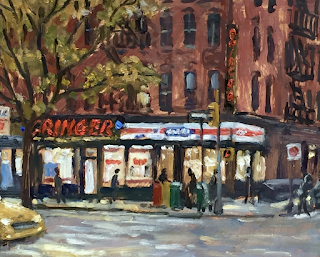 The thing about playing guitar is if you don't keep playing a song you've learned, you tend to forget how to play it.

Such was the case with a song I once learned, "Pitseleh" by Elliott Smith.

The song itself isn't that hard. In fact, like many other Elliott Smith tunes, the most challenging part is the timing. Still, if you asked me to play "Pitseleh" today, I couldn't—I've forgotten.

But I'll never forget where I was when I learned how to play it.

I learned to play "Pitseleh" in a small bedroom I rented in an East Village apartment during the summer of 2007.

The apartment, which I shared with three other people, was in a four-floor walk-up on 2nd Avenue between East Fifth and Sixth Streets. The rent was super high, and the room was literally only big enough for a bed and a desk, but I had always wanted to live in Manhattan.

Of course, things are always rose-colored in hindsight, but I remember really enjoying myself that summer. I'd go to the West Village for dinner or to St. Mark's Place to check out the awesome second-hand shops there. Sometimes I'd just go up to Central Park for a walk or to Midtown for ShakeShack.

Despite all the places I'd go, though, I remember often thinking the same thing when I'd be on my way back home at night: "I can't believe I live in Manhattan!"

And it was in that little rented room of mine, that little postage stamp of a space, that I learned to play "Pitseleh."

I don't remember if I printed the tabs to the song or just read them off my laptop, but I know I would practice the piece over and over.

What really sticks out in my memory, though, when thinking back to learning "Pitseleh,” was just how unbearably hot my room was. The summer of 2007 in New York City was a scorcher, with a high of 96 degrees in July, and my room had no air-conditioner. I just remember sitting on the edge of my bed with my acoustic guitar, pouring sweat as I played. Eventually, I did convince one of the roommates to help me install an air-conditioner, but until then, man, was it blazing up there.

As for the song itself, learning "Pitseleh" was a rewarding experience. I say rewarding because the riff that Elliott Smith plays at the beginning is so resonant, distinct, and, frankly, easy that you immediately feel you've made great leaps forward once you learn it. Plus, the song is basically all acoustic guitar, so what you're strumming sounds exactly like what's heard on the album.

But, anyway, yeah, that room. I actually wound up moving out of it at the end of the summer. I had a full-time job when I moved in but decided to give it up to focus all my energies on journalism school, which was set to begin in September. I moved back to my mom’s apartment, which was where I lived until finishing graduate school. But that room, little as it was, really gave me a taste of a life I liked.

All I Ask of You 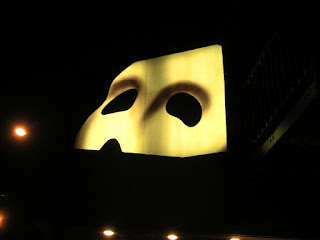 There was this one time, more toward the beginning of Martina's and my relationship, when we were in her car and I began to sing.

Singing is something I like to do sometimes—especially as a joke—and Martina had told me that she liked my voice, so I decided to go for it.

The song that I was singing on this day was "All I Ask of You" from Phantom of the Opera. As I said, I like to joke around, so in my best baritone, with the song playing in the background, I just let loose.

No more talk of darkness/Forget these wide-eyed fears/I'm here, nothing can harm you/My words will warm and calm you

At first, I just took my singing as a joke. But when I looked over at Martina, I saw she was paying attention to the lyrics and had begun to take me more seriously.

Let me be your freedom/Let daylight dry your tears/I'm here, with you, beside you/To guard you and to guide you

Martina's interest continued to grow—she was totally digging it—and, suddenly, I realized that something was beginning to happen: what had started as a joke was turning into a real moment between us.

So I barreled toward the refrain—because what a refrain it was going to be!

That's all I ask of you

And when I looked at Martina after that line, after the refrain, she had tears in her eyes—and I can't say that mine were dry.

So today I have to celebrate a milestone: 99.2% accuracy.

Let me explain. Many times after I play a game of chess, I analyze it after it's finished, and the website that I often play on, chess.com, has this pretty cool tool that helps me do this. See, after a game is done, all you have to do is hit the"analyze game" button and you are given a report that tells you, among many other things, how accurately you played. I've had games in which I played very accurately—i.e., I found the best moves 90 percent of the time—and of course, I've had games in which I played very inaccurately—I found the best moves, let's say, only 15 percent of the time.

But today, I reached a new plateau. In one of the games I played, I had an accuracy score of 99.2 percent. Here's the game. I have the white pieces. Enjoy.

Some of my favorite moves:

9. Qxd4. Usually, it's not a good idea to bring your queen out into the middle of the board so early in a game, but in this position, I knew that if I wanted to maintain an edge, I would have to do so.

11. Qd3. This is actually my favorite move of the game, and the one I spent the most time trying to find. I knew after 9. Qxd4 my queen was going to be chased back; however, it was crucial to find a square where a) the queen couldn't be harassed any further and b) her majesty still had attacking potential.

16. Be5. I fought so hard for an initiative in the opening and got it. But it was important to keep the pressure on, and this move did just that.

Posted by Chad Smith at 7:21 PM No comments:

When Nadi entered the diner, I waved to her and she immediately saw me. She walked over to my table and sat in the booth across from me.

"So this is where you like to hide out?" she said.

I noticed that she had a bruise on her face, but I thought it best not to say anything...at least not yet.

"Well, sometimes you just gotta get away from the world," I replied.

The waitress came over. She took our order. Nadi only asked for coffee. After what she had been through, though, I couldn't believe she wasn't hungry.

"You're not gonna order anything?" I said.

"Oh, Jeff. You think I can eat? I can't eat. Eating is the last thing on my mind right now."

The waitress came with the coffee. After she poured it, I said to her, "Actually, we reconsidered. My friend here will have a grilled cheese sandwich."

The waitress took out her pad and pen. "Do you want tomato with that?" she asked Nadi.

I put my hand out. "With tomato," I said. "She'll also have a large chocolate milk, too."

The waitress took the order. "With whip cream, or...?

"Yes, with whip cream," I said. Nadi was smiling.

After the waitress left, Nadi said, "I can't believe you."

Posted by Chad Smith at 3:41 PM No comments:

Rob was waiting for the elevator when I saw him. Originally, I was going to take the stairs, but I thought it might be better to use the opportunity to talk to—or dare I say bond with—my new brother-in-law.

"You going all the way to the lobby," I asked.

Rob turned to me. His expression was blank.

"Sure am," he said and looked at the little digital display next to the elevator door. The elevator was currently on 37; we were on 10.

Rob nodded, then immediately looked down at the floor.

That was the final straw.

"You know, Rob," I said, "we are in the same family now. I mean, we don't have to be best friends, but I think we should at least talk."

Rob was still looking at the floor. "Yeah, of course...talk," he said. "What would you like to talk about?"

Rob took a step forward and pushed the elevator call button. It had already been pressed.

Posted by Chad Smith at 1:56 PM No comments:

"Mind Playing Tricks on Me"

Recently a friend of mine asked me to make a rap mix for him on Spotify. I decided to make the theme of the rap mix “storytellers,” i.e., songs that tell a story. I told my friend that I thought that songs that told stories had a hell of a lot more staying power than songs that didn’t.

Now that I’m older, I can see why. The song is about paranoia. It’s about how leading the street life leads to a lot of paranoia—always thinking that the bogeyman is around the corner.

Anyway, one particular verse of “Mind Playing Tricks on Me” really shines in my opinion. It’s the last one, sung by Geto Boys member Bushwick Bill.  When I was younger, I basically just liked Bushwick Bill's voice in this song. But recently, when making the mix, I realized that Bushwick Bill's verse was pure poetry—just an excellent piece of writing.

This year Halloween fell on a weekend

Me and Geto Boys are trick-or-treatin'

'Til a lawman got behind our ass

So we speeded up the pace

Took a look back and he was right before our face

He'd be in for a squabble, no doubt

He was goin' down we figured

He stood about six or seven feet

So we triple-teamed on him

Droppin' them motherfuckin' B's on him

The more I swung, the more blood flew

It wasn't even close to Halloween

It was dark as fuck on the streets

My hands were all bloody from punchin' on the concrete

My mind is playin' tricks on me

Posted by Chad Smith at 1:18 PM No comments: